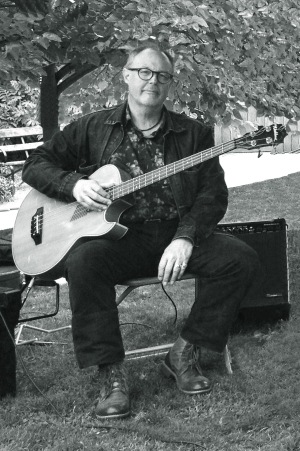 40 YEARS BELOW STAIRS IN ROCK & ROLL

Forty-plus years separate these two photographs. The first was taken within the bombed remains of a church off Tooley Street in London Bridge as part of a batch of publicity pics for a band, which, at that point, was more a shared fantasy than a seasoned reality. I had only a couple of weeks before become a bass-player for no better reason other than that Pete Currie owned both a red Hofner ‘Colorama’ electric guitar and a blue Selmer ‘Artist’ bass guitar and he wanted to stand at the front playing the former as we evolved triumphantly from college jug band to rock and roll phenomenon. Struggling anyway with moving from root to barre chords at speed and suffering still from flying plectrum syndrome (whereby the inexpertly gripped plectrum played on the downstroke is fired over the shoulder at high velocity), I yielded to the principle of six-strings-good-but-four-strings-better and became The Nervous System’s bass guitarist…

Over the next few weeks I’ll be posting to my blog an account of those four-and-a-bit decades. Expect self-indulgent, name-dropping  with walk-on parts taken by the likes of Sandy Denny, Dorris Henderson, Bert Jansch, Paul Simon, John Peel, David Bowie, Elvis Costello and various blues legends, living and deceased). Over-decorated with the fine lacework of unnecessary detail, it’ll be the equivalent of the pub tale that goes on too loud for too long. With the crucial difference, of course, that here you can slip into the next bar and I’ll be none the wiser!

But for most of us born this side of the Second World War, our lives and times, personal and contextual, are set to a soundtrack that starts in childhood with the uninhibited fever of early rock’n’roll and continues with whatever synthesis of words, melody and rhythm that moves hearts and feet collectively today. So if a sequence here or an anecdote there brings across a little of the atmosphere of time, place and incident then that will be gratifying indeed. But in the final analysis it’s my own desire to track the ‘long strange trip’ from remembered past into active present that drives the story. And that, I guess, is reason enough…

1 Response to DICK JONES: THE BASEMENT TAPES – an introduction…