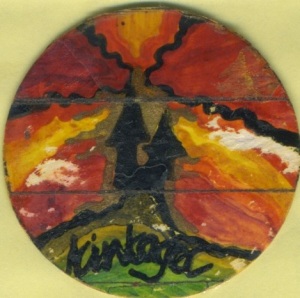 We entered 1968 with just Pete Currie, drummer Phil Burroughs and myself as original Nervous System members. From the many sides of quarto paper onto which we all wrote our choices of names, we selected ‘Tintagel’. Redolent of the Celtic Twilight/Albion mythology undertones that were such a feature of early British folk-rock-into-psychedelia, it seemed to fit the bill perfectly. By now Pete had augmented his Danelectro 12-string guitar with a sitar, both added to the now dangerously obese yet slenderly resourced HP account. (And with all due respect to the mighty Ravi Shankar, whose claim it was that even after several turns around the karmic block the most dedicated practitioner would still be a mere novice on the sitar, it takes only 20 minutes to make it sound as if you know what you’re doing. This is helped greatly if your audience has never seen one before, or if they are comprehensively stoned. Or both).

Pete, Phil and myself were living together now in modish squalor in Charlton, South-East London (think Withnail and I and magnify to the power of 10). We lived off sixpenny packets of chips and steak and kidney pies, the wrapping residue of which was skilfully fashioned into floor covering. I occupied a double bed in the front room, which I saw as an island of relative sanitary sanctuary amongst the flotsam all around. The hallway was full of amplifiers, speakers and instrument cases and inside the cupboard under the stairs an electricity meter hung off the wall, its kilowatt hours recording dials mysteriously stilled. Each weekday morning, regardless of the lateness of the previous night’s gig return, Phil and I would rise at 5.30 and drive blearily in his tiny Thames van up through the east of London to Woodford Bridge in Essex and the Victorian gothic horror that was Claybury Mental Hospital. He worked as a porter and I laboured away amongst the steaming tumblers in the laundry hall. (The bizarre tales that arose from that experience will, at some point, be told).

The band was, as ever, a constantly shifting organism. But at the beginning of 1968 Tintagel was blessed with some outstanding musicians. In front we now had two flautists/guitarists – Iain Cameron, who subsequently went on to play with posthumous wunderkind Nick Drake at Cambridge and Ian Macdonald, who subsequently went on to co-found King Crimson. The Melody Maker small ads brought us Brighton-based guitarist Jeff Matthews, whose skill and consistency helped immeasurably to both augment 12-string-string and sitar-playing Pete when he was on his highly creative game and to compensate for him when he was indisposed. So as regulars on the now burgeoning underground circuit our caché was high and our credibility sound. We were working through an agency and getting steady re-bookings. All we lacked was the two-edged benefits of management and the all-important record deal. 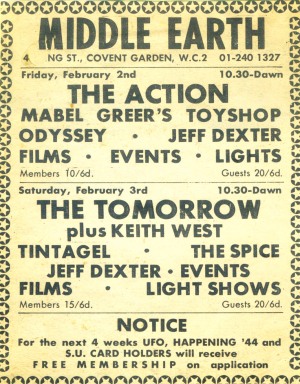 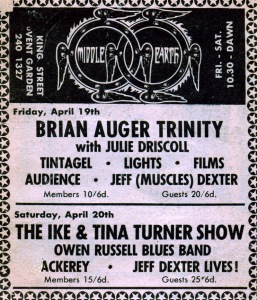 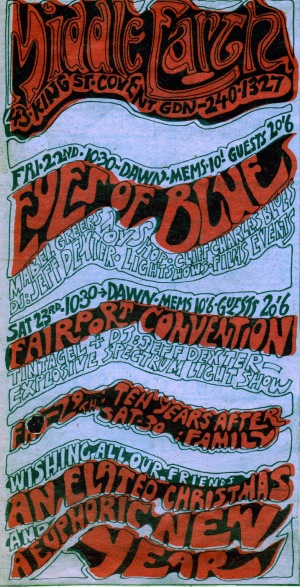 In the early spring of 1968, we peaked impressively. For some time American singer Dorris Henderson had been looking for a band. She’d recorded with guitarist John Renbourne (an album recently re-released to much, very late acclaim) and was touring the folk clubs with a repertoire of traditional British/American ballads, gospel songs and blues. 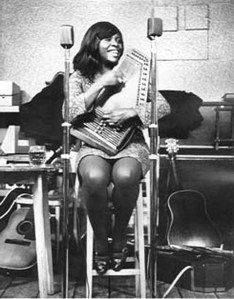 She had been a de facto resident in the UK for some time and with the first visits from touring American gospel and blues artists still fresh in memory from only 10 years before, she had been accorded somewhat iconic status. Tiny but with a deep and powerfully soulful voice, Dorris wanted to break free from what she saw as an increasingly stifling set of musical expectations on the part of her audiences. She was tired of being the authentic voice of black American folk music – a sort of UK Odetta – and she wanted to explore the very same musical roots and shoots that were exciting us so much. With Renbourne now ensconced in the band Pentangle and the influence of the West Coast folk-rock bands still a powerful force, Dorris was looking for similar opportunities. It was our ad in the increasingly progressive New Record Mirror that caught her eye and after a meet-up and a session, we agreed to hitch up together. We were more than happy to take on much of her solo repertoire and she was excited by our portfolio of eclectic covers and original material. But it was from the start a mariage de convenance rather than a merger and for all the insouciance of the age that had us boasting of taking on a ‘chick’ singer, Dorris was calling the shots.

Three gigs, all close together, fully justified the union, helping Dorris expand her musical scope within a band context and doing us no harm at all for the distinguished association. Two of the gigs were engagements that Dorris had had in her diary for months and, because of her musical clout and strength of personality, she was able to re-negotiate both to include ‘her’ band. The first was at Bert Jansch and John Renbourne’s folk club situated in the huge Three Horseshoes pub at the top of the Tottenham Court Road. We played to a sizeable crowd and it went down well. Dorris’ driving voice sat comfortably on top of our 12-string arpeggios, our woodwind, the running, looping bass lines and Phil’s light but driving drumming. 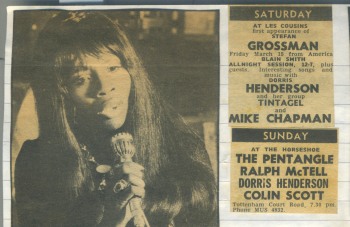 Several members of the audience hung around as we slipped down a quick after-hours beer at the bar before shifting the gear into the van and heading south of the river. Dorris brought over a pale, rather diffident Scot and a small, dark, solemn-faced New Yorker and we found ourselves being thanked for our efforts and praised for our originality by club host Bert Jansch and his pal Paul Simon.

In early spring we fulfilled, with Dorris, one of our bookings at the Marquee in Wardour Street (a club whose minute, unsanitary dressing room has accommodated every band of subsequent note in the land.) After a storming set to a packed house we adjourned to The Ship, the nearby Marquee local. Clinging to Dorris’ arm and talking urgently as we walked the few yards up Wardour Street was a fierce lady with thick blonde hair and dark eyes. In the pub she ignored the band completely, leaning conspiratorially towards its singer and telling her – as if at that high point she needed persuading – that the future for the female vocalist was in front of a shit hot band. Within a month or so Sandy Denny was fronting our old Middle Earth regulars Fairport Convention. 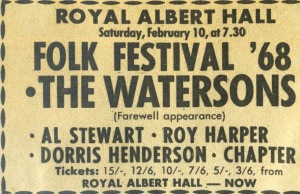 In May we played the Albert Hall. Dorris had a support spot on a packed bill for the farewell concert of folk’s first family The Watersons, splitting after relentless touring since the early ‘60s. Following a nightmare soundcheck with Phil’s bass drum echoing back off the circular galleries a half-beat late (“The night they invented ska”, muttered a miserable Phil), I paced the ornate corridors, dry-mouthed with terror as post-Dylan epic balladeer Roy Harper overran his set massively. (I bear the grudge still). We hurtled onto stage 40 minutes late, whimpering like aristos facing the guillotine. At all points of the mighty hall an audience still in post-Harper rant shock, stirring and muttering, watched us as we stumbled about the vast stage, tripping over cables and manhandling instruments that we had completely forgotten how to play. But Dorris, the consummate professional, seduced the audience within seconds and lost in the unrepeatable moment, we played our full programme impeccably. Numbers I remember from that extraordinary night included from Dorris’ erstwhile solo repertoire the folk song Watch the Stars and Jackson C. Frank’s Milk and Honey, and from our set-list Love’s Message To Pretty, Donovan’s Season Of The Witch (featuring Pete on bravura sitar) and our own White Morning (lyrics by D. Jones).

A handful of further gigs came and went and then Dorris returned to Los Angeles for a family visit. On her return, with regrets but good sense she quit Tintagel to join the fast-rising, already successful Eclection, who had management and a recording deal. Suddenly bereft of our supremely talented meal-ticket, we wobbled, recovered, lost members (notably the very talented Iain Cameron and Ian Macdonald), auditioned, gained members and tried to re-orientate as in the days before Dorris. But we’d been royally spoiled and within a few weeks we lost direction and with the compass gone that crucial sense of being ourselves alone dissolved. So with neither bang nor whimper but simply a drifting away of key components, Tintagel finally sundered at the end of the year. For the first time since Bismark’s Imperial Jug Wizards, Pete Currie and I were not on either end of a stage together. His departure to join the protagonists of the revolution in the offices of hippy broadsheet International Times pulled out the last threads of the old lineup and with the gravest of misgivings I took a deep breath and leaped into the unknown…

I'm a post-retirement Drama teacher, currently working part-time. I have a grown-up son and daughter, three grandchildren and three young children from my second marriage. I write - principally poetry but prose too, both fitfully published. My poetry collection Ancient Lights is published by Phoenicia Publishing (www.phoeniciapublishing.com) and my translation of Blaise Cendrars' 'Trans-Siberian Prosody and Little Jeanne from France' (illustrated by my friend, the artist, writer and long-time blogger Natalie d'Arbeloff) is published by Old Stile Press (www.oldstilepress.com). I play bass guitar & bouzouki in the song-based acoustic/electric trio Moorby Jones, playing entirely original material (https://www.facebook.com/moorbyjones?ref=aymt_homepage_panel + http://www.moorbyjones.net/). I play the same instruments in the Celtic/English/Americana/acoustic ambient trio Escher's Dream. I have a dormant blog with posts going back to 2004 at Dick Jones' Patteran Pages - http://patteran.typepad.com - and I'm a radio ham. My callsign is G0EUV
View all posts by Dick Jones →
This entry was posted in Uncategorized. Bookmark the permalink.