INKLINGS # 13. Down on the killing floor…

Education is what remains after one has forgotten what one has learned in school.
Albert Einstein

South-East London Boys’ Secondary School, Deptford, South-East London.
Struggling my way (sometimes literally) through bone-wearyingly long days in a South-East London boys’ secondary school, I’m rapidly coming to the conclusion that the teacher’s task is a simple polar process. At the northern end, where those boys lightly caressed by the penumbra of the curriculum live, we lob the books from desk to desk at 9.00 am and it’s heads down until 4.00 pm. Then once a year the uniformed drones are herded en masse into a reeking hall to spill the contents of those lobbed books onto file paper and then, after six weeks of exhausted holiday, we resume the lobbing.

At the southern end, where the ostensibly ineducable live, different tasks are undertaken. In this realm of pedagogic shadow much of the time is passed in a climate of threatened or actual violence. It permeates the atmosphere like the humidity before a tropical storm and one awaits constantly the bursting of the clouds. Minor lightning strikes precede the deluge. If the boys aren’t pushing each other over banisters or into lavatory bowls, then somewhere a teacher is using his freewheeling power of corporal punishment for such infringements of day-to-day protocol as wearing a school cap back to front or a school tie for a belt. The cane is used regularly by Mr. Pyle, the tiny, bullet-shaped Headmaster, but the default tool of correction for we foot soldiers here is the rubber-soled gym shoe. There is intense, even heated debate in the staff room as to whether leaving the laces in provides extra tensile strength or whether removing them provides added flexibility.

My first real call to arms comes one day on playground duty. I have positioned myself as usual two thirds of the way up the fire escape steps like a fully dressed lifeguard at the edge of a particularly troublesome sea. I am, as usual, willing the hands of my watch to clamber up towards 10.40 just a little bit faster so that I can blow the whistle and, like a successful Canute, turn back the tide.

And then suddenly, with the inexplicable swiftness of that jungle tempest, the random, scattered groups of boys coalesce into a jostling uniformed mass. Like iron filings to a magnet, hundreds of black-clad figures are sucked inward towards a central hub of activity. A fight – the duty teacher’s nightmare. As I take the iron steps in twos and fling myself into the edges of the imploding throng, seizing boys by their blazer collars and flinging them behind me, a curious booming roar goes up all around. It’s like hearing the crashing breakers of the sea from beneath the waves. I know that my colleagues will be packed around the staffroom window, coffee cups in one hand, crumpled newspapers opened at the jobs section in the other. They will be watching my action keenly, discussing my tactics, judging me on speed, style and control.

Eventually I reach the centre, the eye of the hurricane. A tight-knit ring of grunting, sweating, feral boys holds the ring open, leaning back hard, arms outspread, giving the combatants just enough room to manoeuvre. Their feet scuffle for purchase on the tarmac against the mighty press from behind. As I lurch into the circle, carried forward by my own momentum and the accumulated pressure in my wake, I nearly stumble onto  the hunched form of Franny Smith. He’s kneeling on the upper arms of a terrified smaller boy, his head tilted back, wild-eyed, his torso swiveling around, arms extended, hands open, screaming: “Give me a fucking brick! Give me a fucking brick!” And, as I straighten up, Danny Wright breaks through the inner circle in front of me, half a house brick proffered in his fist… 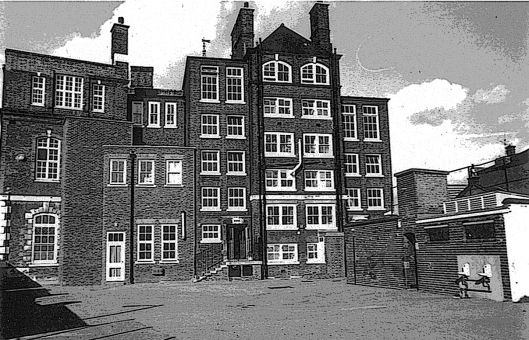