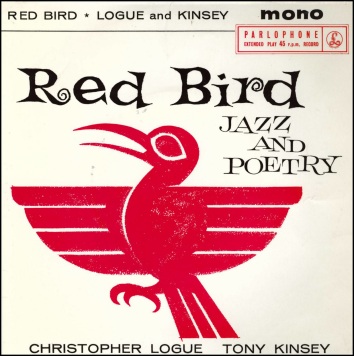 When I was 16 and the proud possessor of a vast black turtleneck jumper, a pair of 15”-bottom black jeans and army boots with blood-red laces, I went to a jazz-and-poetry concert in Leeds. I can’t remember now how we swung it. Our boarding school, 13 miles from the city streets, set amongst the wind-swept fields around Wetherby, was of liberal persuasion. But the Head, a muscular Quaker committed to bracing rambles across the moors, preferably in driving horizontal rain, believed jazz to be decadent and sybaritic. He would have never had granted us late night leave for anything less uplifting than an organ recital or an evening of Beethoven’s later string quartets. So presumably our lie was rock solid and backed up by the cultural events columns of the Yorkshire Post.

The venue was the Esquire Club, a strip joint by day and a gorgeously seedy jazz club after 7.30. We sat at a small round table and lit our licorice paper ciggies from the burning candle stuck in a wax-embellished Chianti bottle. Decadent sybarites, we had arrived and for an ecstatic two-and-a-half hours we were as cool as a polar bear’s pyjamas (as one of us – Andy B, I think – put it).

In actual fact, as became apparent to me much later on, we were lucky enough to catch four of the seminal figures in what passed for the British poetic and musical avant garde of the time. The two poets were Mike Horovitz and Pete Brown and the musicians were the composer Cornelius Cardew and the sax-player Dick Heckstall-Smith. I was entranced from the start. Already in thrall to bebop and the then emergent cool school sounds and passionately in love with the Beats, this was the perfect synthesis. And I can identify that glorious evening’s offerings as the inspiration point from which sprung the notebooks, folders and ring-binders of derivative and uncomprehending drivel that comprised my early oeuvre.

A vital component of the Beat ephemera that I gathered around me at that time was a six-track extended play record, a poetry-and-jazz E.P. called Red Bird. It featured the poet Christopher Logue reading loose translations of Pablo Neruda’s 15 Love Poems to a jazz backing by the Tony Kinsey Quartet. The auspicious combination of Logue’s sinewy tenor voice, the surreal romanticism of the verse and the lithe, lyrical jazz settings (which featured some of Britain’s top jazz players) seduced me instantly. I played it to vinyl extinction, each session transporting me away from the bucolic surroundings of my West Riding boarding school to les bas fonds of the Soho that I explored (by safe daylight) every holiday.

Sadly, the all-but-unplayable original disc vanished during my student years and I spent the next three decades trying to find a replacement copy. Eventually, eBay coughed it up and I dodged the heavy bidders and secured it with a massive ‘Buy Now’ excess.

Here it is, for better or worse, complete with nostalgic surface noise. I can’t judge it: it’s one of my embedded cultural milestones and within a bar and a stanza I’m back in my Yorkshire dormitory, gazing out of the sash window onto a Soho street scene. 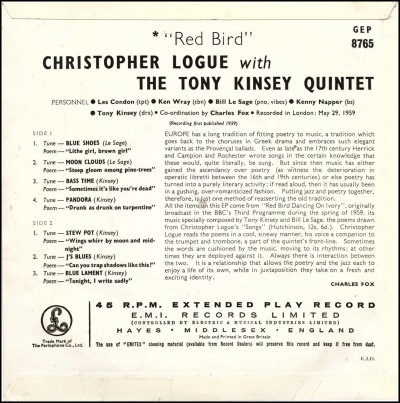 I'm a post-retirement Drama teacher, currently working part-time. I have a grown-up son and daughter, three grandchildren and three young children from my second marriage. I write - principally poetry but prose too, both fitfully published. My poetry collection Ancient Lights is published by Phoenicia Publishing (www.phoeniciapublishing.com) and my translation of Blaise Cendrars' 'Trans-Siberian Prosody and Little Jeanne from France' (illustrated by my friend, the artist, writer and long-time blogger Natalie d'Arbeloff) is published by Old Stile Press (www.oldstilepress.com). I play bass guitar & bouzouki in the song-based acoustic/electric trio Moorby Jones, playing entirely original material (https://www.facebook.com/moorbyjones?ref=aymt_homepage_panel + http://www.moorbyjones.net/). I play the same instruments in the Celtic/English/Americana/acoustic ambient trio Escher's Dream. I have a dormant blog with posts going back to 2004 at Dick Jones' Patteran Pages - http://patteran.typepad.com - and I'm a radio ham. My callsign is G0EUV
View all posts by Dick Jones →
This entry was posted in Uncategorized. Bookmark the permalink.