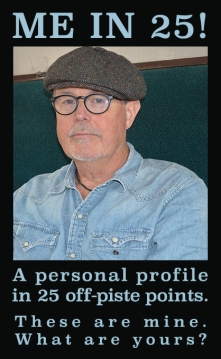 1. My earliest memory comes from around the age of 18 months. I was standing up inside my cot and my father came into the room with a ginger biscuit for me. As he approached the cot he tripped and dropped the biscuit into my full potty. I was inconsolable.

2. I am sometimes incapable of logic, patience or calm when dealing with challenging day-to-day operations within the material world. I am firmly convinced that all inanimate objects, regardless of nature or scale, are in a state of undeclared war against humankind. I share with Basil Fawlty a policy that, if a delinquent object – a chair, a vacuum cleaner, a drawer, a motor vehicle – fails to respond to reasoned argument, it must be chastised, even unto destruction.

3. When I dream, almost invariably it’s of corridors, stairwells, crowded rooms, many storeys, fast-moving groups of people. I seldom remember more than fragments of my dreams, but their unsettling influence sometimes extends well into waking hours.

4. I believe that three of the most important inventions of the 20th century are the 0.5-sized V5 fibre-tipped pen, Doctor Marten boots and the Dyson vacuum cleaner.

5. I am a radio ham. My calllsign is G0 EUV. A few years back, when I was active, I could send and receive morse code at a rate of about 12 words a minute.

6. In 1989, during a trip to the Urals city of Ekaterinburg (then still Sverdlovsk), as a licensed radio ham, I operated the university amateur station, putting out calls under its Soviet callsign. I was the first non-Soviet amateur radio operator to man the station and I received many glowing comments from UK and North American hams on the excellence of my English.

7. In 1985 I compiled a dictionary of Anglo-Romani, the patois of the English Gypsies. It remains in a set of notebooks, superseded by a number of superior (if less quirky) published versions by other compilers.

8. At the age of 8 I was a school refuser. 10 years later I applied to teacher training college and subsequently qualified as a teacher.

9. In the early ‘70s I auditioned Elvis Costello as keyboard player for my band of the time and chose someone else.

11. Four things (amongst many) that will bring tears are: watching ‘Brief Encounter’ yet again, Vaughan-Williams’ 3rd Symphony, the ‘Pastoral’, the closing scene of ‘King Lear’ and Roy Orbison singing ‘Love Hurts’.

12. I am pretty much innumerate, able to manage only basic addition, subtraction and multiplication.

13. I may yet hear the call, I guess, but here and now, at this moment in time, it’s my quiet conviction that there is no God.

14. When I was a teacher at the King Alfred School in North-West London, Stanley Kubrick’s daughter Vivien gave my wife and I a kitten born on the set of ‘A Clockwork Orange’. When subsequently it became sick with meningitis, SK sent me a letter offering the services of his vet. So concerned was he as to the fate of the unfortunate cat, he provided me with his personal ‘phone number so that I could ring him ‘at any time of day or night’.

15. Had I been born a girl I would have been named Charlotte Mary Ann. I was injudicious enough to reveal this at primary school. (Which might go some way towards explaining the school phobia!)

16. I don’t follow any particular philosophy, teaching or creed, nor do I have any theories or convictions proposing some pre-ordained meaning to life. I believe that the best of us is in our capacity to give and receive unconditional love and that the struggle to prioritise that above all other callings provides purpose enough.

17. I taught Heather McCartney when she was about 11 years old. On one occasion when I was overloaded with books and files, she kindly carried my bass guitar – an original Hofner ‘Violin’ model, the famous Paul McCartney bass – from our classroom, where I had been storing it prior to a gig directly after school, to my car. A sense of the resonance of this has grown over the years.

18. A band of which I was a member once played to a capacity audience in the Royal Albert Hall.

20. I have no earlobes. Interpretations by others of this phenomenon vary between their being accepted as a sign of congenital genius and an indication of inbuilt diabolical tendencies.

22. Whenever I see a single magpie, I inscribe a cross in the air and say, “Good morning, Mr Magpie, how’s your wife?” I see this as insurance in a world in which nothing, nothing is absoutely certain.

23. In the early ‘70s, with other chemically enhanced members of the band I was in, I visited the derelict and deserted Nunhead Cemetery in the middle of an acid trip. Whilst all around me my companions were noisily unravelling, I experienced an all-pervading sense of calm and serenity such as I’d never experienced before, nor indeed since.

24. As a novice skier of one week’s experience in Les Arcs, in Savoie, France, I found myself briefly at the top of a vertiginous slope. Briefly because within the two heartbeats it took to register the steepness of the slope and the length of the descent, momentum took me onto it and moving forward at gathering speed. Very shortly into the massive downhill acceleration, I realised that I was probably going to die. All fear left me at that point and I tucked the skis under my arms, sunk into a crouch and headed ecstatically towards oblivion. Eventually the corresponding slope on the other side of the valley into which I plunged slowed me to a halt. In a lifetime of general indolence, it was probably my most exhilarating three minutes.

25. Until my early 60s it was my intention to cheat disease, accident and natural decay and live well into my 90s. In 2005 I was diagnosed with prostate cancer. My operation and subsequent radiotherapy were successful, but ever since then I have been conscious of the possibility of its return. My perspectives on human fragility and mortality have changed profoundly. There is an upside to this and a downside.