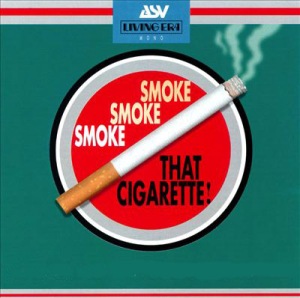 SMOKE, SMOKE THAT CIGARETTE by ASLEEP AT THE WHEEL

A while back, The Independent reported Oxford professor of medical statistics and epidemiology Sir Richard Peto as stating at a cancer conference in Birmingham that one billion people will die from smoking-related diseases this century unless drastic steps are taken. The highest death toll will be in the developing countries.

When I was at college I took great pride in my smoking. Not for me the bog standard student’s fag du jour, a Player’s Number 6. I favoured in any given week Sullivan Powell full strength, Balkan Sobranie, yellow packet Gauloises, untipped classics Player’s Gold Flake, rollies formed out of Auld Kendal in liquorice paper, and, until the 1967 Arab/Israeli War, a very classy flat Egyptian cigarette under the imprimatur of Simon Artz. And when I finally ran out obscure cigarette brands I smoked a pipe, flourishing for a while a beautifully carved Meerschaum that I’d bought in Cyprus, stuffed with the lung-scouring Coniston Black Plug.

In later years I smoked cigars – mainly Villigers, but, when I could get them, Swisher’s Sweets or Fleur de Savanne. From time to time, when flush or simply reckless, I’d lay in a small stock of Hoyo De Monterrey double coronas, which could be purchased loose from that most fragrant of tobacconists, Smith and Son in the Charing Cross Road.

And then a surgeon, investigating a night-time breathing problem, found a small papaloma inside my throat. He recommended that I have it removed at the earliest opportunity. For two months I was convinced that I had cancer and by the time an ENT specialist removed it, analysed it as benign and pronounced it to have absolutely nothing to do with years of exotic pulmonary abuse, I had given up smoking completely.

Now the practice seems alien and perverse to me. I don’t feel any of that priggish righteousness that so infects the professional non-smoker. And although I find the smell of standard brand cigarettes abhorrent, I don’t cross busy streets to strike them from the mouths of those still afflicted. But the notion of setting fire to a small cylinder of dead leaves and then inhaling the smoke produced strikes me as every bit as crazy and inexplicable as it did to Bob Newhart’s Elizabethan taking the ‘phone call from Sir Walter Raleigh in the Americas.

God knows, life is perilous enough from the moment one steps from one’s front door. I’ll take my chances from day to day and happily except myself from that doomed one billion

BOB NEWHART ON THE ‘PHONE TO SIR WALTER RALEIGH

Tobacco, divine, rare, super excellent tobacco, which goes far beyond all the panaceas, potable gold, and philosophers’ stones, a sovereign remedy to all diseases…but as it is commonly abused by most men, which take it as tinkers do ale, ’tis a plague, a mischief, a violent purger of goods, lands, health; hellish, devilish and damned tobacco, the ruin and overthrow of body and soul.
Robert Burton, (1577-1640), English clergyman author of ‘The Anatomy of Melancholy’.

Tobacco drieth the brain, dimmeth the sight, vitiateth the smell, hurteth the stomach, destroyeth the concoction, disturbeth the humors and spirits, corrupteth the breath, induceth a trembling of the limbs, exsiccateth the windpipe, lungs, and liver, annoyeth the milt, scorcheth the heart, and causeth the blood to be adjusted.
Tobias Venner, (1577-1660)’ Via Recta ad Vitam Longam’

I have seen many a man turn his gold into smoke, but you are the first who has turned smoke into gold.
Queen Elizabeth I (1533-1603), speaking to Sir Walter Raleigh who brought the tobacco plant to England from America

Yeah, babe, you just watch. When I die they’ll all blame the fried egg sandwiches and the fags … and it’ll have been all the fucking wholemeal toast and fresh vegetables’
Kathy Burke, English actress

Remember, if you smoke after sex you’re doing it too fast.
Woody Allen