We all of us – well, many of us – carry through from childhood certain key interests or preoccupations. Living under what was then the London Airport flightpath, I grew accustomed to seeing at comfortable height pretty much everything that left the ground and traveled from it. I still feel a frisson of excitement when I hear the sound of a piston aircraft engine. And if it’s a Rolls Royce Merlin… But this is to lapse too much into a time when the machines of war were just the whirling hardware of excitement and adventure. Now it’s their shape and sheen, the pure aesthetic of form. Taken in the moment, it can just about transcend function.

Here are three poems about aeroplanes. They can be found in my first collection, Ancient Lights .

The strangest of times: a skein of geese
crossing the bedroom window, heading west
and no body of water within seven miles.
I am playing the pagan – sleeping late amongst
the Sunday morning bells.
Heaven is a cloudless sky
in late September, harvest past,
leaves on the turn.

At first I think I hear the binder,
wheels beating, turning at the headrow,
but the fields are bare.
Such a beating, a clattering.
More geese searching for a lake
in this land of furrows? Or
the rector in his Wolesely
come to seek me out?

And then my window darkens
into the shape of wings, jagged wings –
Weston mill uprooted, reeling across the fields?
Certainly a hurricane of sorts
in the throat of this beast
squatting low over the beeches,
dabbling its feet in leaves, roaring
in a black updraft of rooks.

An aeroplane, fearful in the untried air –
nothing like the rising bird
it mocks. This is a man,
dressed in wire and canvas,
climbing out of the clover.
This is a godless man ascending,
out of the dust, towards the light. 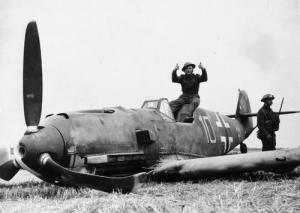 It’s a fire next time in scripture. And when it came
it was sky-borne. Some had said at first
that out of it might come a cleansing;
out of the sky might fall a fire

bright and holy, prophecy fulfilled. September,
and I trimmed the ivy round the lych-gate.
It was lifting tiles clear of the joists
and my gardener was still in France.

That was about as close as the war
had come – censored letters, rumours,
like an invisible tide you can hear at the edge
of the world. Little to see beyond uniforms,

gas masks in boxes, gummed paper stretched
over windows. And then, that afternoon, flying west
and in and out of cloud, the planes, a geometry
of crosses. I watched and all around

the earth stood still. The organ voice
of their passing scattered rooks, rippled
the water in the rain-butt, rattled a latch.
And then we carried on, conscious only of a sniff

of autumn in the air, the planes forgotten
in an empty sky. That evening we were told
of the bombing – docks ablaze, the tram wires down,
parish halls as hospitals. But still it came

from the wireless voices, morning papers and
the travellers’ tales at the village bar. Birds trilled;
I picked a sprig of yarrow for my hat, and rain
rushed across the lead roof of the transept.

The the Messerschmidt came. Not quite, as they say
in comics ‘out of the sun’: it was a dismal morning
stacked with cumulus. But we can all remember
from our kitchens, hayricks, lonely bedrooms

(I was in the vestry hanging surplices) the sound –
a falling cadence, like a voice that begins
in the throat but can’t find words. ‘Despair’,
it would have said. We heard it, all of us.

But no one saw the plane come down,
just the gout of fire that coiled and spun above
the oasthouse. Then, when they searched
the fields around, those Home Guard amateurs

(the lads who filled my pews at evensong),
they found a booted leg, bloodless, like a spare part
brought along in case of need. Little Sammy Scase
took the joystick home and his granddad scraped

the handle clean. (‘Viscera’, the vet said later
in the milking parlour). Then it rained again
and the army came to haul away the wreckage.
And no-one paid for Vincent’s oasthouse. 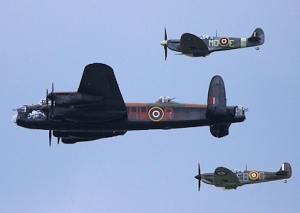 Even now, here, this past
before my past leaks down
the long conduits, the time-
channels, weed-locked with

my own memories. Back then,
on corner bombsite, in the
air-raid shelter under the apple trees,
that past before our past

bellied up, breathed in our faces.
Churchill, Hitler, Uncle Joe bowled
down cinema aisles and into
our infant dreams. Parents’ stories,

a conspiracy of desks – war-echoes
blew like late rumours from a world
still turning out of darkness. Our legacy
was smoke from fires still burning.

And now, trailing tails of smoke,
red, white and blue, the parachutists turn
and turn in a blank sky. The last Lancaster,
Spitfire, Hurricane tug their trinity

of shadows over the aerodrome, over
the lifted faces of the crowd, across
the eyes of old saluting men,
remembering. Their past before

my past speaks in the beating
engines, the ghost-passage of three
black crosses over September fields,
heading east to the world’s edge.

I'm a post-retirement Drama teacher, currently working part-time. I have a grown-up son and daughter, three grandchildren and three young children from my second marriage. I write - principally poetry but prose too, both fitfully published. My poetry collection Ancient Lights is published by Phoenicia Publishing (www.phoeniciapublishing.com) and my translation of Blaise Cendrars' 'Trans-Siberian Prosody and Little Jeanne from France' (illustrated by my friend, the artist, writer and long-time blogger Natalie d'Arbeloff) is published by Old Stile Press (www.oldstilepress.com). I play bass guitar & bouzouki in the song-based acoustic/electric trio Moorby Jones, playing entirely original material. https://www.facebook.com/moorbyjones?ref=aymt_homepage_panel http://www.moorbyjones.net/) https://www.youtube.com/results?search_query=MOORBY+JONES spotify:artist:07MDD5MK9MnRGSEZwbsas9 I have a dormant blog with posts going back to 2004 at Dick Jones' Patteran Pages - http://patteran.typepad.com - and I'm a radio ham. My callsign is G0EUV
View all posts by Dick Jones →
This entry was posted in font. Bookmark the permalink.

3 Responses to FLIGHTPATHS – POEMS ABOUT AEROPLANES